Traditionally, packets are forwarded by routers based on the destination IP address within it's header. However, sometimes it is desirable to route packets based on the source IP address.

An example of when you might want to do this is if you have two WAN links. Say you own a coffee shop and want to offer your customers free WiFi. Your router may have a WAN link into your organisations MPLS network and another WAN link directly to the internet. You want any devices on the corporate network to have traffic sent to the MPLS WAN and any traffic from guest devices sent to the internet WAN.

The below diagram shows an example topology. 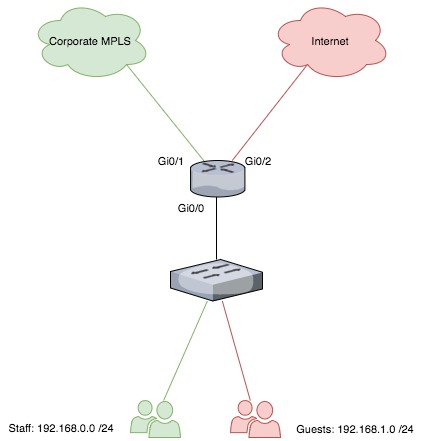 We will be using Policy Based Routing (PBR) to achieve this goal, the required configuration to ensure that staff follows the green route to the Corporate MPLS and that the guests follow the red route to the Internet is as follows.

That's it! Traffic entering the LAN interface on Gi0/0 will now be inspected using the route-map 'source-based-routing', the route map well first see if the IP address matches any entries in the 'ROUTE-TO-MPLS' access-list, if true, the exit interface for that traffic will be via Gi0/1 towards the corporate MPLS. If no match is found we will move onto the next statement in the route-map which will do the same checks for guest traffic.

Enter your email
Subscribe
This is the first of a series of posts on my Cisco DevNet journey, becoming a Cisco Certified DevNet Associate by passing exam 200-901. When writing code, you could just use Notepad but it doesn't make sense. Integrated Development Environments such as Visual Code provide a host of tools and
Over the last few weeks, I have been researching what I can achieve with home automation. After browsing countless web articles and watching hours of various YouTube videos the first decision I made was what wireless protocol I would use for connectivity, I decided on Zigbee. For those who don't
Cisco DNA Center has a feature known as 'LAN Automation' which is designed to automatically discover and configure your underlay network. This post assumes that you already have your 'Site Hierarchy' and various settings configured such as AAA, NTP, ISE and DNS, as well as your credentials. An IP address